The last week of 2015’s Aquarian month promises to be COSMIC as the Moon transits through the last four signs of the zodiac (Sagittarius to Pisces), giving us TRANSPERSONAL background energies from both SOLAR and LUNAR sources. Added to this Venus chasing Mars through Pisces, the final zodiac sign, the one that seeks REUNION WITH THE UNIFIED SACRED SOURCE, is inviting us all into the dance of SHIVASHAKTI as these two planets head towards a conjunction in Aries, the sign of the Self, on Feburary 22nd.

My feeling is we will be whisked along into new levels of experience, feeling and understanding, whether we like it or not. Mercury has completed his retrograde in Aquarius and seems to me like the cat is out the bag… the world is ready for some Aquarian perspective.   For those who are open and ready for a ride beyond the limitations of our individuality in order to find out more about our nature as a COLLECTIVE CONSCIOUSNESS, this could be an exciting and invigorating time. Those who are resistant to the energies will either find them so strong they are carried along the tide or they may feel like they are drowning, losing themselves, losing the plot. If this happens, encouraging them to see it as a chance to find a new plot, a bigger – aquarian – pot in which to put their understanding of life, would be the way to go.

The Sun and the new Moon arrived in Aquarius, the waterbearer who pours the cosmic lovelight from his jug, on the same day this year, January 20th, switching on the energies of this transpersonal air sign full blast. During the past weeks I have observed that if we actively choose to connect ourselves to aquarian energies… ie focussing on the bigger picture, joining our hearts and minds with others in common cause, exploring human nature… the winter journey of healing and release, of inner focus and reflection, becomes easier. We gain insights from sharing with others and seeing what they reflect back to us, we benefit from support that reminds us how unique and special we are, that offers love and understanding, that doesn’t judge us. During the Aquarian month it pays to connect to the group mind, the collective spirit. This is the time of year that the mind naturally wants to open and let in new ideas…. and coming next is the Piscean month when the spirit in us seeks to surrender into those ideas, experience communion with the Self, others and the Universe.

Pisces is home at the moment to its ruler planet Neptune (mystical seer, conveyor of universal love) and to Chiron, the Wounded Healer, both of which are transpersonal planets affecting whole generations as they move through the signs. Add in the personal planets Mars and Venus in Pisces and we have huge alchemical potential in the air. As we heal individually from our wounds, our loneliness, our belief in separation, we also heal the whole. This is one of so many astrological alignments coming our way this year that are offering opportunities for human consciousness to break through its nightmares and madness into clearer vision and EXPERIENCE of our nature as one ALMIGHTY CONSCIOUS COLLECTIVE.

Moon in Sagittarius from Thursday evening 1647 GMT to Saturday 2225 gives us a FIRE SIGN VALENTINES, but of course it is a TRANSPERSONAL fire energy, encouraging us to see that LOVE FOR ALL is the destiny for humanity, that the constant emphasis of our music culture, of films and tv on one-on-one romantic love is ONLY SELLING US PART OF THE STORY.

From Sagittarius the Moon moves through Capricorn, which brings transpersonal earth energy to help us work out how to turn our VISIONS OF UNIVERSAL LOVE into practical manifestations here on earth. At 0013 Tuesday 17th Moon arrives in Aquarius, and so the astrological month ends as it began – with both Sun and Moon in the sign whose Age we entering. Since the 1960s a gradual – sometimes one step forward, two steps back – process of Aquarian transformation has been underway. Every generation during the last 50 years has had its share of transcendental experiences, often through substance use…. and although drug use remains illegal, there are signs that discussion of the spiritual/mystical use of drugs, natural and manmade, that was so big in the 60s and so suppressed since, is making a comeback… eg conference on psychedelics in Greenwich in July. The spread of spiritual endeavours in the last decade has been huge, easily bigger than what happened in the 60s, thanks to the Internet, but this r-evolution in human awareness is of course largely ignored by the ‘powers that be’, ie media, government, finance, because it threatens their very legitimacy and existence. Stephen Fry and Russell Brand put into the public arena words that reflect how people actually think, unlike any religious leader who increasingly only speak for minorities in a language that seriously needs updating. Fry points out that many are at the stage of anger with god, fury at the injustices perceived in life. Brand shows there is a stage beyond that anger – a stage of opening to the search, to the mystery, to the miracle of our existence, becoming open to the adventure of life and finding a relationship with its SOURCE WITHIN OURSELVES, where answers to our questions can indeed be found.

The Age of Aquarius is where the external objective scientific search and the internal subjective spiritual path join in one glorious exploration of what it is to be alive. This last week of the Aquarian month we should be getting a dose of this perspective, individually and collectively.  The Moon is however WANING this week and the energies pulling inward, so it might seem more that  we are experiencing the things that prevent us from experiencing peace, love and unity.  This happens because we have accumulated so much fear and doubt during our lives, that has to be passed through and released to get to the deeper riches.  This is a time we can release loads.

On Wednesday 18th we get A SECOND NEW MOON WITHIN THE AQUARIAN MONTH (KNOWN AS A BLACK MOON): we are being hit by energies OF NEWNESS, telling us this is a massive breakpoint with the past, for ourselves if we need it, and for all. Then immediately the Sun and Moon both arrive in Pisces (Moon at 2347 then Sun three minutes later), giving us a shift of background energies on both personality (sun) and inner self (moon) levels shift from cosmic Aquarian air to mystic Piscean water. Time to merge with the higher Self, with life itself, lose all sense of isolation, inadequacy and suffering in the glorious knowing – and feeling – that WE ARE ALL ONE, that HEAVEN IS HERE INSIDE US BEING BORN, that the adventure of consciousness is ETERNAL and OURS.  Perhaps the lesson of these transpersonal energies is we humans have the choice to participate in them or ignore them – we were told that EVOLUTION IS A PHYSICAL OCCURRENCE, BUT OF COURSE IT IS CONSCIOUSNESS THAT IS REALLY EVOLVING IN THE UNIVERSE, WE ARE ITS LATEST MANIFESTATION AND WE HAVE TO CHOICE TO EVOLVE FURTHER OR NOT.

19TH FEBRUARY IS CHINESE NEW YEAR, START OF YEAR OF THE WOOD SHEEP. Sheep years are supposed to bring peaceful energies, life slows down a bit and people become more caring and affectionate. Goddess knows the world is ready for this kind of energy after the last three years of intense energies coming from the Dragon, Snake and Horse! The fast paced year of the Horse is coming to an end, a time for enjoying what has been built up is coming, a steadier time which will be less about dramatic upheaval and more about consolidating what we have learnt and discovered, giving us the chance to settle into whatever new version of ourselves the events of recent years have led us to. On the 19th Moon conjunct mystical Neptune is bound to get us feeling there is something in all this imagery and mythology!

Also on the 19th Mars makes it into Aries, where his dynamic energy is totally at home. He might feel like he wants to roar after all that time in the underwater, compassionate Piscean vibration, but the Sheep energy will likely mellow him out – and Venus is hot on his tail, shifting from Pisces into the fire sign, the sign of the Ram of course, on the 20th and reaching a conjunction with him in the sky on Sunday 22nd. This feels to me like a powerful alchemical moment of creative energy, the first of three conjunctions of Mars and Venus coming this year.

Shifting from our old internal assumptions and attitudes into bigger, brighter, better ones takes time, it happens in stages. There is often a residue of old emotional baggage to be released in order for the shift to happen. The collective consciousness is going through such a massive shift now, and it is accelerating all the time, that perhaps the work of release and reformation will become easier, quicker and more thorough.

I AM ANOTHER YOU YOU ARE ANOTHER ME

TOGETHER WE BECOME FREE. 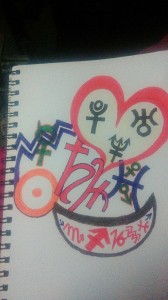