“The first phase of Gay Liberation (1969-1990) created a small clearing in the forest of Heterosexual Supremacy where we could begin to find ourselves again with self-acceptance.
Now it is our historic responsibility to move beyond Gay Assimilation and Sexual
Orientation, the ideology of current gay leadership, to the next phase of Gay Liberation.  This work involves, with conscious awareness, existentially and historically reclaiming and discovering ourselves and roles we have played in society and continue to play, unconsciously. This work is, at a fundamental level, both political and spiritual.”

In the UK 2017 has seen actions, celebrations, art shows and much discussion around the 50 year anniversary of the Sexual Offences Act of 1967, which partially decriminalised sex between men in England and Wales. The act made it legal for two men aged over 21 to have sex in private – in fact if anyone else was in the same house at the time the sex was still illegal – this was overturned by the European court in 2000, not long ago. (Scotland legalised gay male sex on the same basis in 1981 and Northern Ireland in 1982).  In fact persecution of gay men did not suddenly end – there were over 15000 prosecutions for indecent gay behaviour in the decades following the act.  Only once the Labour government came to power in 1997 did the atmosphere really change, with the age of consent equalised (in 2 stages), the vile Tory Clause 28 repealed, plus adoption rights and civil partnerships were granted too.

The Wolfenden Report, on which the Sexual Offences Act was based, had actually been written a decade earlier, but it took the societal shifts of the 1960s before any action was taken.  During those 10 years the British Empire shrank – many, especially African, countries became independent. Britain retreated, leaving behind its legacy of homophobic attitudes and legislation, as it had already done in India and elsewhere.  The British Empire did so much to damage indigenous attitudes to gender-fluid individuals and same-sex erotic activity around the world, and its current formulation, the Commonwealth, continues to turn a blind eye to virulent homophobic legislation.

“The penalties for private, consensual sexual conduct between same sex adults remain harsh in a number of Commonwealth countries. They include 10 years imprisonment and hard labour in Jamaica, 14 years in Kenya, 20 years plus flogging in Malaysia, and 25 years in Trinidad and Tobago. Bangladesh, Barbados, Guyana, Pakistan, Sierra Leone, Tanzania and Uganda have a maximum sentence of life imprisonment, while in the 12 northern states of Nigeria the maximum penalty for male homosexuality is death. In some countries such as Cameroon, arrests and imprisonment for acts that indicate homosexuality are frequently reported. In Uganda and Nigeria recent legislative proposals would significantly increase the penalties for homosexuality.

While mainstream Gay culture has pursued a largely Assimilationist approach – consumerism, gay marriage etc, the Radical Faeries are a tribe of Gay Essentialists who create spaces around the world where queer people can live on our own terms, not those of the dominant hetero culture.  We get to explore who we are in zones of creative, supportive, safety.  The downsides of the Assimilationist universe – body fascism, objectification, judgmental bitchiness, deadly drug abuse etc – hardly show up in Faerie spaces. When we are free to express the love, lust and joy in our souls without fear or restriction we discover that there is much more to being queer than what we do sexually.

Radical Faerie tribes have emerged in the USA, UK, continental Europe, Israel and Australia since the 1970s, evolving on the sidelines of the queer universe, usually meeting far from cities in wild natural places.  This summer over 100 faeries from these tribes joined with representatives from countries where it is much, much harder to live out our lives at a GLOBAL FAERIE GATHERING held at Featherstone Castle in Northumberland, UK.  Queers from China, Russia, Pakistan, Singapore, Nigeria, Cameroon and Benin joined the gathering, the intention of which was to foster the emergence of Global Radical Faerie community, so that “queer people step up and claim our freedom and security and human rights, our meaningful and valuable place in society.”

This Faerie of Albion believes the situation for gay/queer people on the planet could be dramatically improved if the Commonwealth owned up to the evil legacy left by the British Empire. I would like to see Queen Elizabeth II, who has never spoken about gay issues, to send out a positive message to her queer subjects across the world.  I would like her

– to speak out about the plight of lgbtiq+ people in the Commonwealth
– apologise for the evil legacy of homophobic legislation that the British Empire left in place around the world
– affirm that gay, lesbian, trans, bi, intersex, queer people have important roles to play in society, in fact without our cultural and spiritual input there can never be balance in the world.

While Londoners have had a summer full of ’50 years partial decrim’ activities to explore – art shows, demos, parties etc – the Faeries have mostly been out and about at festivals and gatherings.  London Fae hold full moon get togethers in the city during the year, but in the summer we scatter to the four directions to soak up the good energy and good times.  Now as we prepare for our Autumn programme of activities the Equinox is presenting us with an opportunity to make a contribution to the commemoration in our own unique style – one of the things that makes Faeries so distinct from mainstream gay life is our love of ritual.  A plan has emerged to gather at Equinox (22nd Sept) at the mystical circle of 13 trees on the eastern edge of Green Park, close to Buckingham Palace and make ritual on the theme of balance before popping along for a photo opportunity on the Mall – this will be backed up with letters to the Palace and Commonwealth Office outlining our polite request for some affirmative action.  Surely the 50 year anniversary of the ’67 act has been headlined enough for the Queen to publicly mention homosexuality – transexuality – bisexuality for the first time in her reign?

We are asking the Commonwealth to send a message to its queer citizens.  We know that pressure on governments can be deleterious to our cause.  What we seek instead is a grassroots rising of confident queer campaigners who feel empowered and emboldened to take on the hatred and misinformation that abounds in their countries.  I am asking Queen Elizabeth to send a message of affirmation to the world that gives these activists, lovers and dreamers a boost they so desperately need. 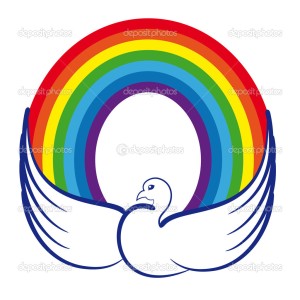 The work we do as Radical Faeries links the spiritual with the political because it is about queer people around the world redefining Who We Are and letting the world know about it.  The Radical Faeries are inclusive of people of all abilities and from all roots. At this Equinox Action there will not be huge amounts of walking and the surfaces we move across are mostly flat, once assembled.

To join in come find us at the Tree Circle, which is just off the path that leads from Green Park station (London W1) towards Buckingham Palace – look for the trees adorned with ribbon – at 6pm prompt on Friday 22nd September.

AND PLEASE DRESS TO EXPRESS YOUR QUEER SPIRIT AND FAERIE POWER, BRING RATTLES/BELLS, FAERIE LIGHTS…. PLACARDS AND BANNERS TOO…