Equinox is the turning point – the inward pull of the Winter energies gives way to the growing, vital, impulse of the rising Spring. We can see in nature just how dramatic this shift is, and as humans we can learn from nature – to bring human minds, hearts and bodies in tune with the seasonal shift the ancient pagan religions used to make energetic, ecstatic Spring celebrations, which shook people out of the slumber of winter. Ecstasy was understood as a state of divine possession – where, through dance, intoxication, sex and even pain, celebrants got “out of their minds” to experience themselves as part of the Great Mystery, the dance of the gods and spirits.

Ecstatic wisdom is lacking in modern society. The benefits of transcendental journeys are appreciated by few, and rarely included in the discussion about and search for mental health and general well-being. But the simple thing is – if we humans don’t get to spend time ‘out of our heads’, we get stuck in them. Mental illness is the result. The need for transcendence is in-built in us, so many people end up seeking it unconsciously – even compulsively – leading so easily to drug, alcohol and sexual addictions, which result, I would say, because of a lack of a viable spiritual/mystical framework within which to hold the experience. Modern rational thought has released us from the chains of religion, but left us in freefall as individuals unaware of the intrinsic unity of life that is manifesting through us.

In ancient Greece and Rome the first weeks of Spring saw the wild and ecstatic rituals of Dionysus/Bacchus and of the Great Mother Cybele and her consort Attis. Much of what we know about these rituals comes from outraged and disturbed Apollonian Greeks (who sought to bring order in the universe above all things) and appalled early Christian writers (who saw the body and sex as sinful). Both Dionysus and Attis are gender-fluid, queer characters, whose worship was serious competition to Christianity until around the 4th century CE. Dionysus and Attis, like Jesus, were ‘divine children’ born of the union of a deity and a human. Both have death and resurrection stories as part of their mythology, both were seen as ‘saviours’.

At the turn of the first millennium death, resurrection and salvation were the big theme in religious circles. A process was underway in which the secret sacraments of the Mystery Schools were becoming ‘solidified’ in religious form – and increasingly taken literally, seen as something happening externally, instead of understood as mystical symbolism teaching about the pathway of the soul through incarnation. One of the oldest Mystery Schools was that of Cybele, the Great Mother, that had a long and respected history in the Turkish area of Phrygia in Anatolia. The Greeks equated Cybele with Rhea, the Mother of the King of the Gods, Zeus, and the Romans held her power in such awe that, when threatened with defeat in the Punic Wars against Hannibal of Carthage, they consulted ancient Cybelline oracles and followed their guidance to invite the Great Mother to become Rome’s official deity. A black meteor stone was brought from Phrygia to Rome with great fanfare and a temple inaugurated. 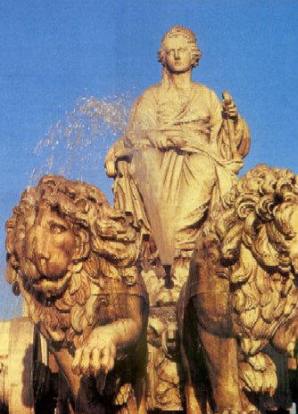 The arrival of Cybelline worship in Greece, around the 6th century BCE, and in Rome from 200 BCE, was controversial for some. Cybele’s worship centred on the story of her lover Attis, who castrated himself to avoid marriage to a human woman. (The castration botched, Attis died – violets sprang from his blood – the Goddess bathed his testicles in holy water, wrapped them in his clothes and buried them. In the most ancient legends he was reborn as her daughter. In Christian times his followers depicted him as a Christ-like god surrounded by stars in heaven). The wild and effeminate looks and behaviours, the brazen sexuality and wild rituals of the wandering Gallae priests of Cybele were shocking to many. Their Spring rituals involved frenzied dancing, flagellation and self-mutilation in order to achieve ecstatic states of union with their beloved deities, Cybele and Attis. To be like Attis, and become closer to Cybele, at the peak of the wild Spring rituals, on the Day of Blood (March 24th), initiates, while in a frenzied state, would castrate themselves. They would then run through the city and throw the testes at random into somebody’s house – that person then became responsible for taking care of the new priestess. This continues a tradition, by that time many thousands of years old, in which transgender priests were seen as the holy servants of the Goddess. These priests are mentioned in the Old Testament – named the Qedesha, this word was translated in the King James Bible as ‘sodomites’ (removing all link to the sacred), and in modern Bibles is usually put as ‘male shrine prostitutes’ – but the original meaning was actually ‘The Anointed Ones’, or ‘The Holy Ones’. Jesus speaks of eunuchs in the Gospel of Matthew, saying that some are born that way, some are made so by others, but others choose to be so, ‘for the sake of the kingdom of heaven’. Jesus also points out that only some will understand this. 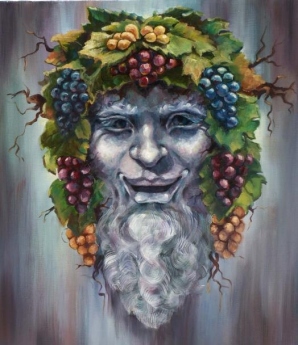 Bacchanalian rituals celebrating the start of Spring were similarly wild and orgiastic. Dionysus to the Greeks and Bacchus to the Romans, the rituals of this young transgendered god were a highlight of the ancient year. Dionysus was the child of Zeus and a human woman, Semele. The Goddess Hera was so jealous of him that she had the Titans rip him apart. But Rhea (Cybele) brought him back to life. His rituals, held in the forests, were popular, but notorious for their effect on women, who would become sexually wild and abandoned under his influence. Through imbibing his precious gift to humanity, wine, people became possessed by the god and experienced his direct presence amongst them.

The Spring rituals were a time when order gave way to ecstasy and chaos for a while. The echoes today are the festivals of Purim in Judaism and Mardi Gras in Catholic countries, where cross-dressing features strongly. By embracing the ecstatic, people got some relief from the pressures and trials of regular life, received boosts from the deities to shake off the winter sluggishness and attune to the surging spirit of Spring.

In northern Europe, where the Spring is slower to take hold, the ecstatic peak of the year was (and for some of us IS) celebrated at Beltane, May 1st, with comparable rituals of raising energies through music, dance and sex. Fire is central to the Beltane rituals, burning away of the old and bringing heat and passion to engage the new season. The deities of Beltane are the Goddess and the Green Man, also the Horned God Cernunnos, a northern European version of Pan, another forest deity like Dionysus, also associated with free sexual expression of all kinds.

A prime difference between the emerging new religion and the old pagan faiths was the attitude to the body and sexuality. The Christian church sought to limit, control, contain and suppress the sexual urge. The persecution of homosexual and transexual people and behaviours began as a direct part of the suppression of pagan practices. Anal sex between men, lascivious wild women, orgiastic rituals were all seen as threats to the emerging order of patriarchal control. Spring rituals had to go, as part of the destruction of even the memory of the holiness to be found through same sex eroticism and gender-fluidity.

The principle rivals to the emerging Christ figure were holy queer beings – Dionysus, god of wine and ecstasy, and Attis, gender shifting son/daughter (and lover) of the primordial Goddess. But of course the Christ story is queer also – he was accompanied by a circle of male disciples, one of whom is singled out in the Gospel of John as the ‘disciple whom Jesus loved’, he was taught about love and ecstasy by the sacred sexworker Mary Magdalene, and Mark tells us that in the Garden of Gethsemane he was met by a partially dressed young man carrying water (the symbol of Aquarius, in a culture where women did that work) who fled, losing his cloth, once the guards came. But this queerness is denied and still largely unclaimed even by gay Christians.

Of course the Jesus story is queer. The very roots of religion come from a long tradition of genderfluidity and knowledge of the self through same sex love, whether expressed sexually or not. The suppression of the feminine, the ecstatic and the queer have all gone hand in hand in a patriarchal drive to control and bring order to life’s chaotic energies.

The overall culture will take a long time to shift, but in the 21st century shift is happening. Individually we can make the internal changes we need to bring ourselves into alignment with the cycles and transitions of nature and the cosmos by letting go of all belief in our isolation, by entering into a relationship with the spirit that flow through us and all things and escaping the solitude of the mind-bound egoic sense of self.

Giving ourselves some ecstatic release helps to shift the body and mind into the new season and to new levels of understanding. Dancing, sex, even intoxicants can help. Every trip into ecstasy is an invitation to transformation. Taken with awareness, those trips can helpfully accelerate our evolution, our journey to self knowledge and discovery.