The two major Abrahamic religions, Christianity and Islam, deny the reality of reincarnation, but looking back at history we see this denial has more political than spiritual roots. Reincarnation was taken off the Christian agenda at a church council, called by the Roman Emperor Justinian in opposition to the wishes of the Pope (whom the emperor held prisoner at the time), in Constantinople in 553 AD, It did not serve the interests of the political state to have the populace believing in the transmigration of the soul (and in the 21st century it still doesn’t). Internet sources tie in the behind-the-scenes maneuverings Justinians’s wife Theodora, who had her sights on the goal of deification no less, in securing this denial of the teachings of Origen. We are still living with the destructive consequences of this twist in humanity’s tale.

The council was called to deal with a group known as the Origenists, who believed that after a series of incarnations a soul could achieve divine status, equal to Christ. Orthodox Christians could not accept this – at the council the belief in the pre-existence of the soul was condemned, and reincarnation disappeared from Christian teachings. Debate over reincarnation – metempsychosis was the Greek term used – had raged from the time of Origen, one of early Christianity’s greatest teachers, until this politically motivated move. Since then the Church has taught that a new soul is created with each birth, and it put great effort into dispensing with every heretical Christian group that saw things differently during subsequent centuries. The Cathars, Bogomils, Albigenses, Waldenses and other ‘Free Spirit’ groups which the Church wiped out, embraced reincarnation, and indeed these persecuted groups also saw all forms of sexuality as acceptable and believed the soul could reach divine status while in the body.

Islamic teachings encourage a linear view of life too, and it seems likely that was also inspired by the needs of the political rulers more than the spiritual seekers. Some of the early Islamic Caliphs wiped out the followers of reincarnation-believing faiths, such as Manichaeism in Mesopotamia and Persia (Iran/Iraq), but belief in it remained amongst the mystical Sufis, some Shia sects and in cultures in Asia which retained some of their pre-Islamic shamanistic cultural beliefs.

Note that the oldest of the Abrahamic religions has always accepted reincarnation as part of the great mystery. It forms part of the central understanding in Kabbalah, and orthodox Judaism also acknowledges it, without emphasising it. It really is about time that Christians and Muslims knew that they have been manipulated and controlled by this denial of the soul for a very long time, and that the motivation behind it was political.

Make the population afraid of death and you have a subservient people, easily controlled. The Roman Empire oversaw the turning point in human evolution that led us into fearful, obedient servants to our self-appointed masters. We then became soldiers, workers – and most recently, consumers, doing what our leaders wish, ie maintaining their wealth and power. Science removes spirit all together from the picture, and instead of judgement after death sending us to heaven or hell, we are told a dark nothingness awaits us, an obliteration of our very essence of being. We are still being controlled, discouraged from seeking our own answers and manipulated into serving the economic system.

Yet surveys show over and over that a third or more of people of the western world do accept reincarnation as a fact, and consistently this is the case whether people have a religious belief or not. The soul in us knows that we come here to grow – and maybe eventually reach the point of realisation of our own divinity. The Kingdom of Heaven is within, said Jesus, and at this time of mass obsession with the external world, those that turn within will surely find what they seek. 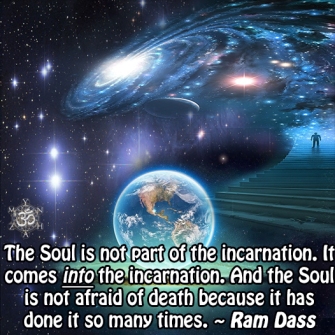 “I died as a mineral and became a plant,

I died as a plant and rose to animal,

I died as an animal and I was Man.

“And God shall wipe away all tears from their eyes; and there shall be no more death, neither sorrow, nor crying, neither shall there be any more pain: for the former things are passed away.”   Revelation 21:4 King James Version